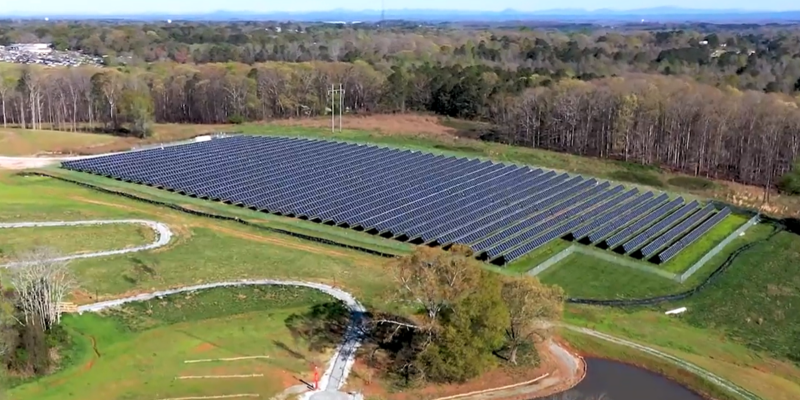 Two Georgia electric cooperatives recently worked with a large commercial member to construct a 1-MW, onsite solar installation to power a portion of the member’s operations. This was one of a growing number of requests from Georgia companies for renewable generation to support their environmental, social and corporate governance (ESG) objectives.

Located in northeast Georgia, the solar installation was part of a newly completed, more than $100 million automotive processing facility for Southeast Toyota Distributors (SET), the world’s largest independent distributor of Toyotas. SET worked with Jackson EMC, the 240,000-member distribution cooperative serving the facility, and Green Power EMC to build the solar project and contracted to take a portion of the power through a corporate renewable power purchase agreement.

“SET was seeking LEED certification for their new facility, in addition to wanting to meet corporate sustainability goals,” Jackson EMC Director of Business Development David Cleveland said. “To help SET achieve their goals, we introduced them to Green Power EMC.”

Founded in 2001, Green Power EMC is collectively owned by 38 of Georgia’s 41 electric cooperatives. It sources renewable energy and negotiates power purchase agreements with renewable resource providers across the state to support its owners’ needs. Its projects total approximately 635 MW of solar and other renewable capacity.

According to TMNA, the solar installation will produce 2.4 million kWh of electricity annually while avoiding 1,777 metric tons of carbon dioxide and 21,346 pounds of nitrogen oxide. Of the power produced, 29 percent will be used to operate SET’s vehicle processing center, while the remainder powers the local community.

The solar project was a win-win for SET and Jackson EMC and its members.

“This project provided our business partner, SET, with renewable energy to help achieve a goal they set for their business,” Cleveland said. “And Jackson EMC members are also receiving more renewable energy as part of their energy mix. Very soon, we hope the site will host students from nearby schools where they can learn more about solar energy.”

Although this wasn’t the first corporate renewable power purchase agreement of its kind in Jackson EMC’s service territory, it was the largest.

“This is the first agreement of this size with a Jackson EMC member,” Cleveland said, noting that renewable power sourcing requests from commercial and industrial members are on the rise and likely to increase in the future. “Corporations consider the availability of renewable energy when making investments,” he said. “I do believe it is a trend, and these requests will only grow.”

“By the end of 2021, Jackson EMC will have more than 30 MW of renewable energy from projects with Green Power EMC. We have another 140 MW generated from other sources for our members,” Cleveland said. “We also work with residential members who want to generate their own solar energy. Currently, we have more than 200 members interconnected with several other projects in the works. Residential members can receive a rebate of $450 per kW installed, up to $4,500 per installation.”

Part of Jackson EMC’s approach to meeting the needs of its members for renewable energy, or anything else, is to be as innovative as possible.

“Jackson EMC provides safe, affordable and reliable electricity to our members,” Cleveland said. “If we can accomplish those goals and reduce the impact on the environment through renewable energy, then we certainly want to do that. Our vision, in part, is to be the best forward-thinking and innovative energy supplier.”