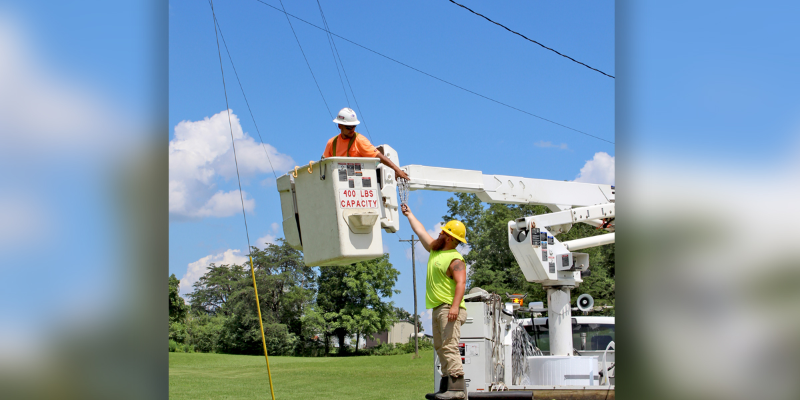 Holston Electric Cooperative (HEC) has enjoyed early success since launching its broadband unit, HolstonConnect, in 2017. The cooperative, serving more than 30,000 members in upper East Tennessee, is about two-thirds of the way through a four-year network build-out and already has more than 5,500 customers.

According to HEC and HolstonConnect General Manager James Sandlin, the impetus for the broadband launch was twofold: demand from members and a change in Tennessee state law allowing electric cooperatives to offer retail broadband service for the first time.

“High-speed broadband was just a dream in 2016 for up to 40 percent of residential homes in Holston’s service territory,” Sandlin explained. “But just like HEC brought electricity to rural residents in 1940, HolstonConnect has dedicated itself to powering homes and businesses in a whole new way, by closing the digital divide in our service territory and improving education, online medical services, the local economy and so much more.”

The 2017 Tennessee Broadband Accessibility Act removed a restriction that had prevented electric cooperatives from providing retail broadband service. HEC responded to the business opportunity by conducting a series of member meetings and surveys, both to judge interest in HEC-supplied broadband and to allow members to voice their needs, questions and concerns.

Due diligence also involved commissioning a broadband feasibility study to help predict the financial viability of a local fiber-to-the-home project, touring other fiber systems, attending various trade shows to learn about technologies and projects, and meeting with other broadband system operators and vendors.

In late 2017, the HEC Board of Directors approved the creation of HolstonConnect, a wholly owned, not-for-profit subsidiary, and in early 2018 endorsed a four-phase plan to complete network build-out in three to five years.

To help finance construction, HolstonConnect has been awarded $7.3 million in grant money by various state, regional and federal agencies. The most recent grant, announced in late August, was a $5.5 million award through the Tennessee Emergency Broadband Fund created using stimulus funds allocated to the state through the federal CARES Act for coronavirus-related relief.

In 2019, HolstonConnect received an $862,000 grant from the Appalachian Regional Commission, and this April a $361,000 broadband accessibility grant from the Tennessee Department of Economic and Community Development.

“Since connecting our first customer in October 2018, HolstonConnect has brought high-speed internet to members in a financially responsible manner, while improving quality of life for those served,” Sandlin said. “We will continue to explore all available funding options to reduce network construction costs and provide our members with vital broadband service.”

As a 100 percent CFC borrower, HEC has also received considerable support from CFC, including two pre-approved PowerVision loans, part of which is being used to fund smart grid expansion associated with the broadband project.

“It has been fantastic working with CFC,” Sandlin said. “And our smart grid investments will enable an unprecedented level of member participation and provide the potential for members to save money by helping them manage electricity use. HEC will also benefit from reduced peak demand, improved system security, reduced operations costs, more efficient transmission of electricity, increased integration of renewable energy, quicker restoration after power disturbances and improved fraud detection. And a smarter grid will support the increased use of electric vehicles, reducing greenhouse gas emissions and fossil fuel dependence.”

With approximately 800 miles of fiber already built, the goal is to finish network construction by the end of 2021, and enable broadband service to all of HEC’s more than 30,000 members.

So far, members have been happy with the rollout. “HolstonConnect has received a public outcry of appreciation throughout our region,” Sandlin shared. “Those who previously accessed the internet only through satellite and those paying high prices as competitors changed pricing once promotional periods ended, have found a new way to power their lives. As member-owners of HolstonConnect, they know they are receiving reliable and affordable service no matter how long they have been a customer.”

He continued: “Taking on a large broadband project is a significant decision for an electric cooperative’s board of directors. Although 70 percent of what you are already doing—hooking up customers, building plant, billing for services, providing customer service—will serve you well as you move into the broadband business, there are also significant differences. For example, you will need to take off your monopoly/cost-of-service hat and replace it with your competitiveness/maximize revenue hat when you venture into the world of broadband.”

The effort has been worth it, though, Sandlin concluded. “We are committed to our community, and each day HolstonConnect and our employees learn more, gain experience and work harder to live up to the heritage of our past. The broadband experience has taught us electric cooperatives can continue to evolve in the business world, just as our members expect.”