Redefining How Battery Storage Scales for the Long Haul 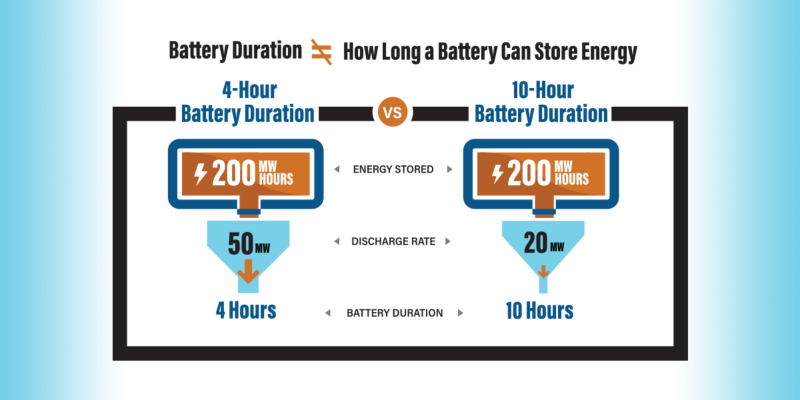 The U.S. Energy Information Administration (EIA) expects large-scale battery storage installations to contribute 10 gigawatts to the grid from 2021 to 2023—10 times the installed capacity in 2019. The EIA also expects most large-scale storage systems coming on-line over the next three years to be colocated at power plants that produce electricity from photovoltaics.

This marks a change from the end of 2020, when the majority of large-scale battery storage systems had been built as standalone facilities. Over the next three years, if all currently announced projects become operational, the share of U.S. battery storage that is colocated with generation would increase from 30 percent to 60 percent.

Lower costs of installing and operating large-scale battery storage systems (BSS) support adding more capacity to store energy at each facility, which could increase the duration that systems can last when operating at their maximum power.

“Adding battery storage to solar generation assets can help firm up the asset,” CFC Vice President of Industry Research and Consulting Mark Schneider said. “This is a way of making a nondispatchable solar resource at least partially dispatchable. For example, in the late afternoon as the sun goes down and electric loads are at their peak, batteries can discharge energy into the grid that the solar panels had collected in the middle of the day.”

Applications for energy storage projects of different duration include:

Minnesota-based Great River Energy and partner Form Energy recently unveiled details on their upcoming first-of-its-kind, multiday storage project. The project is expected to be in operation by the end of 2023 with a 1-megawatt, grid-connected storage system capable of delivering its rated power continuously for 100-plus hours. This is in contrast to the shorter duration available from utility-scale lithium-ion batteries today.

“While other battery technologies employ expensive and rare metals, iron is one of the safest, cheapest and most abundant minerals on Earth,” Great River Energy President and CEO David Saggau said.

The generation and transmission cooperative expects long-duration energy storage to have the potential to solve challenges posed by the variable nature of the most common types of renewable energy.

“While this project will be a relatively small resource on the grid, it is a leap forward for multiday duration storage,” Great River Energy Vice President and Chief Power Supply Officer Jon Brekke said. “We are optimistic that this type of resource could be very valuable as the electric system continues to evolve.”